Blog,Advocacy Farmworker Children and the Harm of Pesticides

Farmworker Children and the Harm of Pesticides

Pesticides used in agriculture contain chemicals that are harmful to people of every age, but kids are particularly vulnerable to the dangerous effects of pesticides for several reasons:

Pesticides—particularly organophosphates which are commonly used in agriculture—can have dangerous effects on the body which can be seen shortly after exposure or many years down the road. Acute toxicity in children can be as mild as a rash, nausea, and vomiting or as severe as lethargy, coma, and death depending on the amount and concentration of the chemicals. Studies have shown that over time, kids exposed to pesticides are more likely to develop cancer, have problems with memory and mood, and become sterile adults.1,2

The children of farmworkers are at an even higher risk of adverse health effects from pesticides because they come into contact with these dangerous chemicals more frequently and at higher doses than the average kid.2 Farmworker families often live near the fields they work in, making their homes and the surrounding area vulnerable to airborne pesticides or “pesticide drift.” Kids too young for school often come to work with their parents and are put in direct contact with newly sprayed pesticides as they play in or near the fields. While illegal, there are a number of children and adolescents who are not enrolled in school and actually work alongside their family members in the fields. Another means of exposure—known as take-home exposure—occurs when family members come home wearing their work clothing or hauling equipment from the fields into the house. Clothing has the ability to soak up a significant amount of chemicals which can then be transferred to furniture, carpets, and of course, children in the home.

Currently, there are few regulations in place that work to address childhood exposure to pesticides. The Worker Protection Standard ensures pesticide handlers are at least 18 years of age and that all personnel stay a certain distance away from newly sprayed fields. While both of these rules attempt to keep farmworker children out of direct contact with pesticides, they are under review by the EPA and are subject to change.3 EPA oversight is extremely limited—especially when it comes to smaller farming operations and the hiring of undocumented immigrants—so any pesticide safety regulations or protections that should be in place are often ignored or implemented in a way that is substandard.4

Vecinos has several health education modules and includes pesticide exposure in several of them. In 2017, we educated over 380 people about pesticide exposure and had 410 health education encounters about the topic. The issue is particularly salient for those children actually working in the fields. Labor laws allow children as young as 10 years old to work in farmwork under certain conditions and with their parents’ consent. Children must be at least 14 years old to perform most other types of work, under both federal and state law.

There are several moves that need to be made to reduce pesticide-related diseases in farmworker children. We need better funding of research projects on this topic to solidify evidence that pesticides from the agricultural industry directly cause some of the major diseases we see in farmworker communities. Strong evidence might lead to greater regulation of pesticides and strict limitations on exposure. We need to keep children out of the fields altogether, either by incentivizing kids to go to school or through easily accessible childcare services for infants and children not of age.  As part of pesticide safety training, all workers should be educated in their own language on the dangers of these chemicals and how to best prevent exposure to themselves and their kids. We also need to support the existing rules of the Worker Protection Standard currently up for debate in the EPA. While exposure to pesticides is not entirely preventable, we do have the power to decrease adverse health effects by limiting the amount of these chemicals farmworker children are exposed to and improving safety around pesticides.

Reproductive Health and the Workplace (How to Prevent Take-Home Exposures)

By: Mary Martinez In January of this year, Vecinos began offering integrated mental health services in its static and mobile health clinics.  The response thus far from our clients has

On January 17, 2019, Senator Dianne Feinstein and Representative Zoe Lodgren introduced a new farmworker bill that would provide a path to citizenship for farmworkers meeting the bill’s requirements... Senator 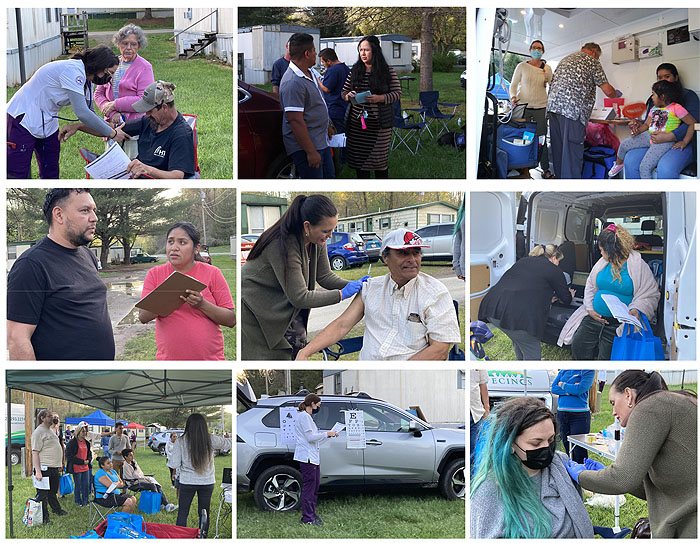